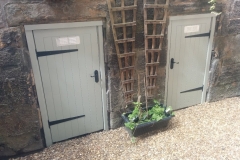 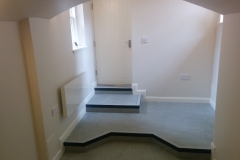 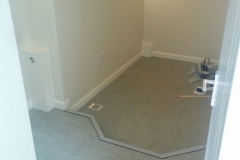 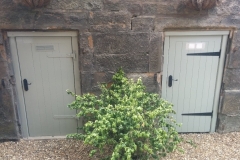 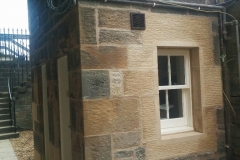 This lower ground floor flat is in the Edinburgh New Town. The property is a listed building which is situated within the World Heritage Site. The flat benefits from a number of existing cellars, however these were mainly in original condition and would clearly benefit from improvements to both stonework and fabric. I worked with the client to clarify the budget and develop the project brief. We were keen to make aesthetic improvements and to make the most of the existing cellar space.

The priority was to improve the existing cellar under the stair which was completely derelict. The space was divided in two by a masonry partition. It’s former use seemed to be as an outside toilet many years ago.

On closer inspection, there seemed to be the potential for a cellar to be hidden behind the rear wall. This was apparent from the arched profile on the surface of the back wall. Initial exploratory work revealed that there was indeed a concealed space under the pavement.

I obtained various official consents, including listed building consent, planning permission and a building warrant. The project was tendered to several contractors then proceeded on site. The internal partition was removed and steelwork inserted to support the existing stone steps above. Once the rear wall was demolished to make an open plan space, the internal floor area tripled in size.

The cellar was dry lined, heated and insulated. Drainage was provided for a washing machine, so it can function as a utility room.

The cellar under the stair now has a Tardis-like character – it’s much bigger on the inside than it appears to be on the outside!

The remaining cellar doors were replaced. Paint colours and materials were carefully chosen to be sensitive to the listed building.

I wish to put on record my thanks and appreciation to Steven for the invaluable ideas and advice he gave me and for the overall project management of the cellar conversion. His easy but firm interaction with the builder was essential to the success of this project and the generation of a valuable addition of space to my basement property in Edinburgh’s New Town.

It is a pleasure for me to recommend Steven’s services without reservation and I wish him well in building a portfolio of projects and clients.